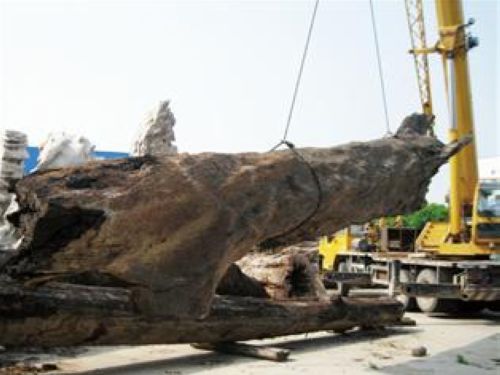 Ebony, also known as gloomy wood, is a nanmu, red peony, and marigold tree that have been buried in silt due to natural disasters and have been formed through a carbonization process that lasted for thousands of years in the absence of oxygen and high pressure. Ancient times, ebony was used as a ward for evil spirits and made into crafts, statues, and amulets. Because of the different tree species, the market value is different. The Phoebe genus of Phoebe genus is the most expensive, up to eight to 100,000 yuan per cubic meter, and the longer the age, the better the preservation and the higher the price.

â€œOne price per day is rising every day!â€ Yang Chunsheng, a maker of plastic furniture in Jiaozhou, has a particularly good mood in recent days. The ebony that was bought from Sichuan for two million yuan two years ago has soared to RMB 10 million. And he is just a microcosm of many ebony stockists in the island city. Looking at the three thick ebony in the factory, Yang Chunsheng, 49, is still proud of the decisive shot two years ago. Yang Chunsheng was loved by his parents for his favorite collection. During the 30 years, he collected tens of thousands of Ming and Qing furniture, jade articles, ceramics, calligraphy and paintings, rocks and other collections. He also opened a private museum of more than 3,000 square meters and displayed his own Collection. Among numerous collections, Yang Chunsheng has a special liking for Wumu, and ebony furniture has also become a treasure of his town hall.

After expert identification, Yang Chunsheng purchased ebony from the previous year as one of the most precious nanmu. â€œAt the time, I just felt that the wood was of high quality, but I didnâ€™t expect it to appreciate so quickly.â€ Yang Chunsheng said that at the time, an ebony seller in Sichuan Province saw three large ebony trees. He took a one-million dollar toothpaste on the spot and bought it now. In years, the market value of these three ebony has risen to ten million yuan.

The crane traveled to Qingdao for thousands of miles

Yang Chunsheng's collection of ebony has a root length of 15 meters. Two adult men can hold it. In order to transport these three large ebony back to Qingdao, Yang Chunsheng has spent a fortune. Due to the thick wood, he hired a large crane and more than 30 workers in the local area. He used cranes to hoist the ebony roots on large trucks and then tied them up. After two days of long-distance transportation, the timber arrived safely in Qingdao.

Ebony is extremely precious, and its preservation naturally requires meticulous care. However, due to lack of awareness in this area, Yang Chunsheng did not protect his heart at the time, resulting in some damage to ebony. Today, Yang Chunsheng arranges workers to give ebony a â€œbath showerâ€ every day to keep it moist enough to prevent chapped cracks. Yang Chunsheng told reporters that ebony is a fossil in plants and can not be used directly after being unearthed, but it is necessary to carefully â€œmaintainâ€ it for two years. After â€œmaintenanceâ€, the wood color of ebony is brighter, and the furniture that is made can have noble and elegant temperament. ".

For two years, these ebony have also been made into a variety of furniture and root carvings. Yang Chunsheng said that due to the utmost importance of ebony, it is not possible to mass produce like ordinary wood and basically adopts a custom model. "According to the needs of customers, we will tailor the drawing model to the customer's needs. If the customer wants a tea table, we will make a model for it in advance. After that, we will start production." Yang Chunsheng said that this would minimize waste of wood.

As â€œthe largest ebony trading base in the countryâ€, Handan City, Sichuan Province is the largest source of ebony in the island city. Every year, there are a number of Island City dealers go to Taobao, hoping to be able to buy high-quality ebony raw materials. Every year, there are seven or eight million yuan worth of ebony raw materials, which are purchased from Sichuan to Qingdao and are hoarded by the island city buyers. In addition, some ebony are shipped from Africa and other places to Qingdao. After passing through these two channels, ebony arrived in Qingdao, up to 10 million yuan each year.

It is estimated that the trade volume of ebony in Handan, Leshan, and Pengzhou is as high as several hundred million yuan each year. When a ebony is dug out of the battlefield, it costs 40,000 yuan for 1 cubic meter, and it can double its turnover. After selling it to Qingdao, it will cost more than 4 times the original value; if it is made into furniture, the price is often a "high price." .

Although the purchase price is high, Sichuan's high-quality ebony has been very difficult to find. Mr. Liu, a maker of mahogany furniture in Daocheng City, will go to embarrassment every year, but not much in the past two years. â€œNow we have money to buy. As long as we have good ebony, we basically follow the orders, Henan, Beijing, Shanghai, etc. The customers in the area all went for grabs.â€ According to public reports, a town in the Jiangbei District of Chongqing once excavated a thousand years of gloomy wood. The news spread like wildfires. At that time, there were continuous limousines with foreign licenses wandering around the town and some foreign accents. The stranger asked around the street or acquired the dregs of wood in the hands of residents.

In February last year, Wu Gaoliang, a villager in Tongji Town, Pengzhou City, Sichuan Province, excavated rare giant ebony in his own contracted land, with an estimated value of 12 million yuan. Subsequently, the local government took Wumu away in the name of the state, triggering a dispute over the ebony belonging to the country. This is only to tear a crack in the complicated ebony trade. The ebony trade has long formed a complex interest chain in the area.

Mr. Liu revealed that if one wants to buy quality ebony from Sichuan, it must depend on the relationship. â€œThe ebony incident exposed only the tip of the iceberg. After the local ebony was dug up, it was not known to the government and it was traded privately.â€ Basically, ebony is dug out from local sand yards. In order to snatch ebony, the local parties are trying to divide the battlefield. Once ebony is unearthed, it will immediately attract all forces to snatch it. In order to acquire Wumu, Mr. Liu spent a lot of energy and money to clear the relationship in the locality. â€œNeed to be familiar with the people in the local sand field, so that once the area is dug to ebony, it will promptly notify to get the goods. Not get it."

At present, ebony speculation has reached a point of â€œcrazyâ€ in the country, and such â€œcrazyâ€ is also approaching Qingdao step by step.

During the interview, a number of industry sources told reporters that the scarcity of raw materials is an important reason for the high price of ebony. Wang Chong, a wood dealer in Daocheng City, told reporters that the formation of ebony requires a history of thousands of years, and the amount of exploitation is getting less and less, and it is not surprising that prices have risen. In recent years, many people have taken a fancy to the value of investment in ebony and stepped up the price of ebony. â€œThe National Palace Museum researcher Hu Desheng once told the media:â€ I do not oppose speculation, some people want to hype, and some people buy it, indicating that it has a market, but if you put the ebony to the high side, this is a joke. â€

In recent days, the reporter visited the Island City furniture store and discovered that furniture made of ebony is frequently used for tens of thousands of yuan, and some are as high as several hundred thousand yuan. In Zhenhai Road Haibo Home Store, the reporter saw that a cabinet made of Phoebe was selling for 250,000 yuan, and the price of this cabinet a month ago was 21 million yuan. An ashtray made of ebony is also priced at 3 million yuan. Thousands of yuan, a set of four treasures of the text will have more than 20,000 yuan. The manager of the store told the reporter that the reason why these ebony products are sold at such a high price is that the raw materials are very good, and the second is that they include the work of carving. â€œNow the price of raw materials is very high, and carving such objects is very difficult.â€

Different from knit fabric,it was weaving by different machine. it includes chffion,plain,poplin etc.